You’re Already There Anyway: Make Work Work for You in 2019!

It might be a little late for new year’s resolutions, but since everyone has already abandoned their first ones, it is prolly time for another round! Do you have any resolution ideas which could only succeed if maybe you were trapped somewhere without your couch, TV, and refrigerator for like…hours and hours a day for much of the week? Though perhaps not as effective as the 24 hour/7 day a week experience of prison where people do thousands of push-ups, create magnificent soap art, and befriend rodents, work is still a place of structure and at least somewhat restricted freedom. In most workplaces, laying on the couch, alternating between napping and watching Netflix, while alternating between raiding the refrigerator and DoorDashing it, is discouraged, making it an 8 hour/5 day a week opportunity to exercise (or attempt to) that elusive and obnoxiously named mental effort, “self control.”

Prominent in the news lately (well, at least in Yahoo News and the Daily Mail) are studies suggesting that a diet low in fiber is the new sitting for summoning the grim reaper prematurely. This was super bad news for my cheese sandwich/snack machine diet, so, I immediately resolved to eat a head of cabbage every day. Immediately following my resolution was the sinking feeling of certain failure. After a lifetime of failed resolutions, I don’t usually make any, but for some reason it flashed into my head that perhaps the structure of the workplace maybe the solution to my lack of self-control. I am here anyway…I may as well eat cabbage all day! (Full Disclosure: At the time, I forgot that I had repeatedly disproven the “work as structure for accomplishing goals theory” after failing at 10 minutes of meditation, the push-up challenge, the plank challenge, learning to do a split, and probably many others lost to time…) 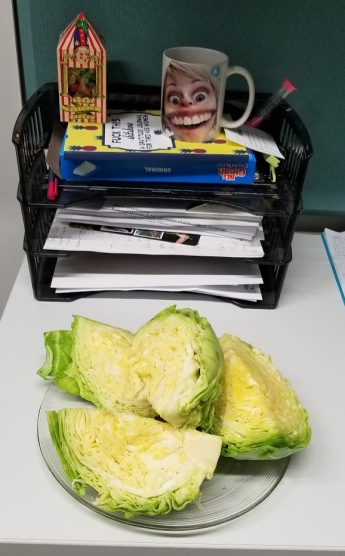 Actually, I didn’t know that I would have to eat it all day. It looks a lot smaller until you chop it into quarters! Even though it took longer than expected, in many ways, it was easier than I thought, since I am blessed with a stomach of iron accustomed to binge eating. With mindless chomping while at my computer, I could easily eat half before lunch. Then, sick of eating, I skipped lunch and ate later in the afternoon. After a late lunch I ate another quarter and all was fine until, nearing time to go home, I faced the last quarter. Even my binge eating friendly stomach had a problem fitting in the last bit, though my stomach didn’t actually hurt and it was like the whole thing never happened two hours later. Despite the relative ease of this resolution for me, I hit a wall on day 8, profoundly sick of cabbage and unable to face another day of it.

Even though I failed in my resolution, it wasn’t a total bust because I started bringing a lot of vegetables to work to eat throughout the day. (I just ate almost half a cabbage while writing the previous paragraph.) So, I still think that the idea of harnessing the structure and expectations of work to accomplish personal goals could be useful for some!

Ideas for Your Success!

And, of course, “the Google” has no shortage of ideas! For exercise, there is the desk squat, the casual lean, desk dancing and many more. For mental health, there is meditation and yoga. For diet, there is bring your lunch and eat healthy snacks. I couldn’t find anything with more exciting suggestions, like “learn to knit in 10 minutes a day while trapped at work.” So, with the help of my coworkers, I made my own list! Put any ideas that you have in the comments below!